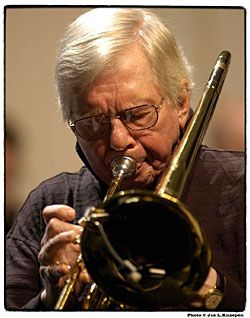 Born in Kansas City, Missouri, Brookmeyer first gained widespread public attention as a member of Gerry Mulligan's quartet from 1954 to 1957. He later worked with Jimmy Giuffre before rejoining Mulligan's Concert Jazz Band. In the late 1950s he moved to New York City to work as a freelance arranger. In the 1960s he also worked as a studio musician, co-led a quintet with Clark Terry and worked in and wrote for the Thad Jones/Mel Lewis Orchestra. In 1980 this band recorded an album of his compositions/arrangements on which two tracks featured Clark Terry. After a period in Europe, he returned to the United States, where he continued to write and record. Bob Brookmeyer also taught jazz composition at the New England Conservatory of Music in Boston, Massachusetts.