RIP...death of Donald Montanaro, a legendary teacher at the Curtis Institute 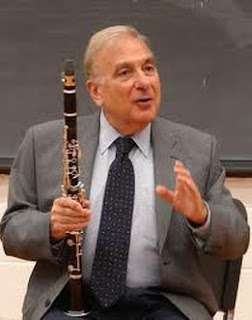 He played in the Philadelphia Orchestra from 1957 to 2005. A student of Daniel Bonade, the first clarinet teacher at Curtis, he represented a line of tradition that stretched back 90 years and more. His students occupy principal positions in many of the world’s premier ensembles. He was a member of the New Orleans Symphony before joining the Philadelphia Orchestra as associate principal clarinet in 1957, a position he held until 2005. Mr. Montanaro has performed at the Marlboro and Casals festivals and toured Europe and the Far East as a soloist and in chamber music ensembles. He is a founder and the music director of the Philadelphia Chamber Ensemble. A member of the Philadelphia Orchestra from 1957 to 2005 and a Curtis faculty member since 1980, his students can be found around the world, occupying important positions in Beijing, Dallas, Fort Worth, Los Angeles, Malmö, Mexico City, New York, Philadelphia, Pittsburgh, San Francisco, Seoul, and Toronto; as well as the Metropolitan Opera Orchestra. - See more at: http://slippedisc.com/2016/12/the-go-to-clarinet-teacher-has-died/#sthash.6y4WdfIx.t3oZnoAk.dpuf