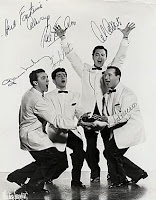 Al Alberts, a founding member of the singing group, The Four Aces, and a longtime TV talent show host in Philadelphia, has died. He was 87.
Chris Alberts says his father died Friday at home in Arcadia, Fla. He says the apparent cause of death was complications from kidney failure.
Alberts featured child singers and dancers on his "Al Alberts Showcase" for more than three decades in Philadelphia.
He was a founding member of The Four Aces, which recorded such hits as "Three Coins in the Fountain," and "Love is a Many Splendored Thing."