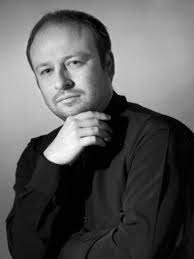 Russell Garcia, QSM (12 April 1916 – 20 November 2011) was a composer and arranger who wrote a wide variety of music for screen, stage and broadcast.
Garcia was born in Oakland, California, but was a long time resident of New Zealand. Self-taught, his break came when he substituted for an ill colleague on a radio show. Subsequently, he went on to become composer/arranger at NBC Studios for such televison shows as Rawhide 1962and Laredo, 1965-67, MGM and Universal Studios and films like the George Pal, MGM films, The Time Machine (1960) and Atlantis, the Lost Continent (1961), as well as his orchestrated themes for Father Goose (1964) and The Benny Goodman Story (1956). He collaborated with many musical and Hollywood stars - Ella Fitzgerald, Louis Armstrong, Anita O’Day, Mel Torme, Julie London, Oscar Peterson, Stan Kenton, Maynard Ferguson, Walt Disney, Orson Welles, Jane Wyman, Ronald Reagan, Andy Williams, Judy Garland, Henry Mancini, and Charlie Chaplin making arrangements and conducting orchestras as needed. Russ loved to ski so he would write on-site scores to ski-content films.