Jazz drumming legend Louie Bellson died on Saturday in Los Angeles. He was 84. 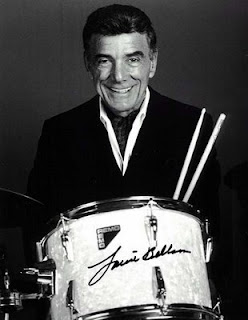 Born Luigi Balassoni, Bellson established himself as a premier big band drummer in the 1940s, drumming with Benny Goodman, Tommy Dorsey and Harry James. He played with Duke Ellington in the early 1950s and in small groups with Art Tatum and Oscar Peterson. Peterson, who was an exacting judge of musicianship, said that Bellson represented "the epitome of musical talent." The video above, from 1957, documents Bellson's renowned soloing ability. Bellson was married for 40 years to singer Pearl Bailey, who said of her husband: "to listen and see Louie is to know Man's love of music." (Bailey died in 1990.) In November last year, Bellson was hospitalized after breaking his hip during a fall. In January, he was transferred to a rehabilitation facility, where he was undergoing a regimen of physical therapy. His passing on the weekend was unexpected. He was active musically until recently. His drumming and composing were featured on a big band CD recorded in 2007 and released last year -- Louie & Clark Expedition 2 -- a project with him and fellow octuagenarian Clark Terry.