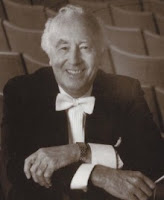 Royston Nash began as a conductor with the Royal Marines from 1957 to 1970. He then joined D'Oyly Carte, becoming Music Director from 1971 to 1979. There, he led the company during its centenary year in 1975 and issued a number of recordings, including the company's only recordings of Utopia, Limited, The Grand Duke, and The Zoo, as well as recordings of some rarely heard Sullivan music. He then moved to the United States, where he became musical director of the Nashua Symphony Orchestra and the Cape Cod Symphony Orchestra until his retirement in 2007. He also founded and conducted Symphony by the Sea. WIKIPEDIA
Email ThisBlogThis!Share to TwitterShare to FacebookShare to Pinterest
Labels: 2016, Royston Hulbert Nash
Newer Post Older Post Home