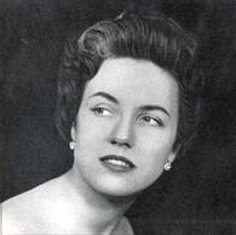 Elsie Jean Morison won the Dame Nellie Melba Scholarship in 1945, and the Queen's Prize at the Royal College of Music in 1947. Among Morison's many recordings, those of Purcell, Handel and Michael Tippett's A Child of Our Time capture the grace and conviction of her singing. She has also recorded an outstanding and very well received complete Brahms Liebeslieder Waltzes, Opp. 52 and 65, with Marjorie Thomas, Richard Lewis and Donald Bell, accompanied by Vitya Vronsky and Victor Babin. In 1963, she married the Czech conductor Rafael Kubelík, and decided to retire from performing. She did sing occasionally post-retirement, such as at a 1968 concert in Melbourne conducted by her husband, with her mother in the audience. Morison died in Prague on 5 April 2016, aged 91. WIKIPEDIA

VIDEO: From "The Fairy Queen" by Henry Purcell, here is Australian soprano Elsie Morison singing the Act II air under the baton of Anthony Lewis. 1957.