Synthesizer and electronic music pioneer Isao Tomita has died at 84 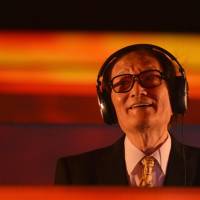 Isao Tomita often known simply as Tomita, was a Japanese music composer, regarded as one of the pioneers of electronic music and space music. In addition to creating note-by-note realizations, Tomita made extensive use of the sound design capabilities of his instrument, using synthesizers to create new sounds to accompany and enhance his electronic realizations of acoustic instruments. He also made effective use of analog music sequencers and the Mellotron and featured futuristic science fiction themes, while laying the foundations for synth-pop music and trance-like rhythms. Many of his albums are electronic versions and adaptations of famous classical music pieces and he received four Grammy Award nominations for his 1974 album Snowflakes Are Dancing. WIKIPEDIA

VIDEO: Arabesque No. 1 from Isao Tomita's "Snowflakes Are Dancing" LP.