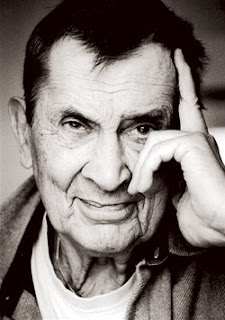 Einojuhani Rautavaara (About this sound pronunciation (help·info); 9 October 1928 – 27 July 2016) was a Finnish composer of classical music. He was one of the most notable Finnish composers after Jean Sibelius. Rautavaara wrote a great number of works spanning various styles. Having written early works using 12-tone serial techniques, his later music may be described as neo-romantic and mystical. Major works include Cantus Arcticus and Symphony No. 7 "Angel of Light". WIKIPEDIA

VIDEO...Rautavaara is a prolific composer with a career spanning seven decades. So far he has created ten operas, of which Thomas (1982-1985), Vincent (1986-1987) and Aleksis Kivi (1995-1996) are the best known. He has also produced eight symphonies and many concertos including the popular Cantus Arcticus; concerto for birds & orchestra (1972) and the double bass concerto Angel of Dusk (1980). Rautavaara has also written reams of choral, chamber and vocal music and a small amount of electronic music. Through working directly from his emotions and not hewing to party line serialism, Einojuhani Rautavaara has emerged, in the autumn of his life, as one the major figures in contemporary music worldwide.Symphony No.8 was composed in 1999. Swedish Radio Symphony Orchestra/Mikko Franck.