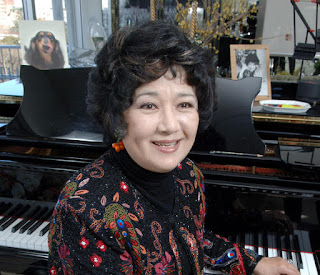 Born Hiroko Fukuda in Yamanashi, she grew up in Tokyo. She began to study piano at the age of 3 at Toho Gakuen School of Music under Aiko Iguchi. In 1959, whilst a student at Chutobu Junior High School, she won first prize at the National Music Competition of Japan at age 15. In 1963, she began piano studied at the Juilliard School of Music, and studied under Rosina Lhévinne. In 1965, at the 7th International Frederick Chopin Piano Competition, she won 4th prize, the youngest prizewinner that year, and was the second Japanese prizewinner in the history of the Chopin Competition. WIKIPEDIA