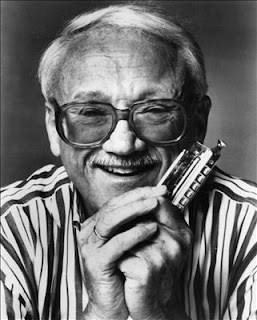 BBC OBIT OFFICIAL SITE
Toots Thielemans (born Jean-Baptiste Frédéric Isidor, Baron Thielemans, 29 April 1922 – 22 August 2016) was a Belgian jazz musician. He was known for his guitar and harmonica playing, as well as his whistling skills. Because of health issues that led to show cancellations, Thielemans announced his retirement on 12 March 2014, cancelling all scheduled concerts. His manager stated that Thielemans "wants to enjoy the rest he deserves." However, he did make one more stage appearance, unannounced, in August 2014, at the Jazz Middelheim Festival in Antwerp. A popular instrumental and jazz standard composed and recorded by Toots Thielemans is "Bluesette," where he used whistling and guitar in unison. First recorded by him in 1962, with lyrics added by Norman Gimbel, the song became a major worldwide hit. He worked both as a bandleader and as a sideman, including many projects with composer/arranger Quincy Jones. Thielemans died in his sleep on 22 August 2016, at the age of 94.